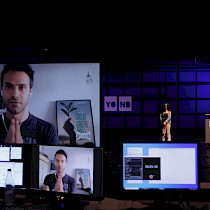 After four days of intensive online discussions, art exhibitions and numerous international films and panels, the winners are now known.

The winners of the film festival are: Jared P. Scott (USA) with his film "The Great Green Wall" USA, Christoph Hertel (Germany) with "After us the flood" and Davide Marinho (Italy) with "Talamanca".

The prize for the best short documentary went to Davide Marinho with his film "TALAMANCA".

Jury statement: "Filmic narration without losing many words: The fight with the banana trees in the opening sequence in slow motion and especially the moon reflected in the rain forest drop (the moon falls at 16:08) are unforgettable moments of this work. A sensitive, meditative observation of the highest cinematic perfection, which allows us to dive into a distant world, where a family still lives in symbiosis with the nature of the jungle. Beyond a purely factual form of presentation of research results and without reflecting only superficially on content, in "Talamanca", a so-called "Visual Anthropology", original sources become the basis of a free film art research and knowledge-forming emphatic representation in the time-based medium: "Talamanca" convinces us of the necessity of artistic emancipation from the older siblings of social anthropology, science and literature, and of what can only be said through the audiovisual.".

The prize for the best short feature film "Documentary" goes to the director Christoph Hertel with his film "After us, the Flood"

Jury statement: "Is it possible to make a farce about the end of the world (at least a small one) that almost comes across as a fairy tale or parable? Which in its pictorial ideas and mise-en-scène reminds us of great role models such as the Swedish master director Roy Andersson? With his film "After us the Flood" Christoph Hertel succeeds in this little feat, which he provides with an important message. Because just like in the world we live in, the population of the fictional village of Klein-Reibach does not want to know about the imminent dangers. And rather close their eyes to the inevitable fate.

As unusual as the stylistics of the short film with its handmade special effects, as fresh and original is the tone of the sensitively overdrawn grotesque. And perhaps this, in addition to admonishing words, of which there are enough at present, is also a method of drawing attention to climate change and all its dangers - with a balanced mixture of humour and seriousness."

The award for best documentary goes to director Jared P. Scott with his film "The Great Green Wall".

A film that gives hope! A film about an ecological and social project that is fascinatingly ambitious. A film that is carried and driven by a vision.

When the Great Green Wall will ever be finished on 8,000 kilometres across Africa is not decisive. What is important is rather the will to change, the power of the music and the boundless optimism in this film. They have a contagious effect. Thomas Sankara is quoted as saying, "We must dare to invent the future." That sets the tone. When grandiose music then celebrates a departure into sustainability and is paired with masterful cinematic craftsmanship, great narrative art emerges. The director Jared P. Scott has succeeded in creating a homage to a future project - at the same time an invitation to a feast for the senses.