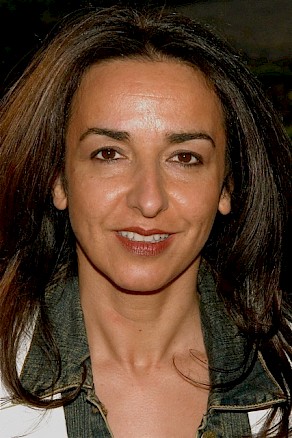 Özkan is an international multiple award-winning author, filmmaker and producer. She lives in Germany but works worldwide.

In 1987 she began studying film at the University of Fine Arts Hamburg and graduated with distinction in 1993. For many years she has worked as a director and scriptwriter for documentaries and feature film and since 1988 she works as an independent filmmaker and producer, and has realised production around the globe (e.g. USA, Turkey, Greece, Guatemala, Ecuador, Costa Rica, China, Iceland, Guatemala). Furthermore, she has released documentaries and features for ARD, arte, NDR, WDR, BR, DW Phönix, H3, MDR, 3sat and FSB as well as for international channels such as Spain TVE and Planet France. Her films have been internationally televised and nominated numerous times.

Her productions are frequently used in political education by renowned international organisations, such as Amnesty International, Greenpeace, Pro-Asylum, the Refugee Council and the Country’s Media Centres. Among others, various schools and universities have included her films in their educational program.

2011 she has also taken up lecturing at different universities, such as at University of Art and Design Karlsruhe as a lecturer for storytelling in stereoscopic 3D (S3D) documentaries and feature film. She has been exploring and working with S3D since 2009. Ever since she has been fascinated with stereoscopic real images and believes that audio-visual narratives should be re-thought with this new technology.

Özkan is a passionate researcher and teacher of new dramaturgical models for interactive digital storytelling and forms of art, including 2D, 3D and VR. She has written several screenplays and has lent her expertise to dramaturgical productions. As a 3D producer she has further contributed to the successful realisation of a variety of projects. Example include short films, documentaries and art installations, for instance “Multicultural Society 3D and Global(is)olation.” In addition, she has assisted in managerial and consultant tasks regarding several EU-projects and has lead workshops in S3D workflow, from filming to post-production.

Özkan has also been a jury member at national festivals, including the 17th edition of “ÖKOMEDIA” - an international environmental film festival - the “Girls go Movie Festival Mannheim” and the “Türk Film Festival Heidelberg-Mannheim”. In 2015 she also took up the role as president of the jury at the “3D BEYOND Festival Karlsruhe”, where she was also program director. Internationally, Özkan has been a jury member at festivals such as the “International African Women Film Festival” and in 2017 the “Zimbabwe and VR Festival” in Beijing, China.

Since 2009 she has been dealing with new media, in particular 3D, 360 °, VR, artistic projects with artificial intelligence and since 2012 she has developed new dramaturgical models for "space-time stories" for "space-time experiences" together with Ludger Pfanz VR, MR. She is currently researching and teaching new dramaturgical models for interactive digital storytelling for 2D, 3D and virtual reality.

With your donation we can minimize the financial risk that we have to take due to Covid19 by a pure online event.

You will find our bank details and Paypal account here.