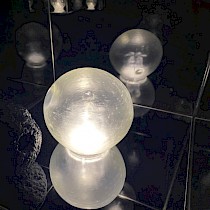 Star dust is as small as 1/10th of a width of a human hair and 70-100 tons of this extra-terrestrial material falls on Earth every single day and these invisible grains hold mysteries of our cosmic roots. Micrometeorite hunters are challenged to find a space spherule in the midst of the human made dust, mostly pollution. Wind and weather move these dust particles around the planet and it gets more and more complicated to understand and predict the movement or consequence of these particles due to climate disruptions. Environmental scientists understand for a while now that dust is very much related to climate change with larger dust storms forming, mixing with the various pollutants. Most go about their daily life without being aware or ever thinking about the extraterrestrial dusts that could be on their kitchen floor, right here on Earth. The alien signal is lost in the human noise.

Dust storms travel far and wide on Earth and most are also linked to droughts and are believed to have been exacerbated by deforestation, overgrazing of pastures and climate change. They carry minute particles of beneficial soil and nutrients as well as potentially harmful bacteria, viruses and fungal spores. Scientists who had the opinion that diseases were mostly transmitted by people or animals now see dust clouds as possible transmitters of influenza, SARS, foot-and-mouth, and are increasingly responsible for respiratory diseases. From Saharan sand dust from Africa falling on the Alps to the ash from fires in Australia landing in Europe – these dusts are the earthly alien particles that mix and overwhelm the space dust.

Borders, walls and other human made restrictions of ‘foreign’ dusts, people and ideas ultimately will not work as we are all part of a vast interconnected cosmic system.

The animations show the complexity that emerges from meteors breaking up and falling down mixing with natural and human made dust. Layers of audio signals from space mixing with human made noise and melodies of various cultures envelop the space further amplifying the experience of the dust complexity. time: 7 minutes