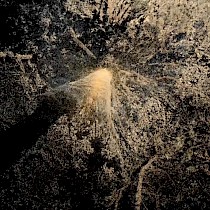 Atmospheric Forest visualizes the complex relations between a forest, climate change and the atmosphere. It is a result of a three-year artistic research project on Pfynwald, an ancient Alpine coniferous forest suffering from drought due to climate change, which Swiss scientists have turned into a 'living observatory'.

Overall, the trees are not only oxygen generators, they breathe as well. Trees emit large amounts of volatile organic compounds that we can sense as a habitual scent of the forest. While some scientists believe that the strong smell of a pine forest indicates that climate change can be limited, others suggest that the volatile emissions could make global warming worse.

Atmospheric Forest is based on “Ecodata–Ecomedia–Ecoaesthetics” (2017-2020) research project supported by Swiss National Foundation and co-produced by ZKM to be premiered in Critical Zones exhibition (May 22, 2020 - February 28, 2021).

Atmospheric Forest in VR/360-video online exhibition version is premiered in Critical Zones exhibition digital platform at ZKM, and will be exhibited as VR/video installation in ZKM from July, 2020.