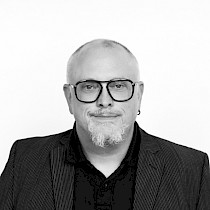 Prof. Dr. Steffen P. Walz is an explorer by heart, and Director of Innovation at diconium, a Volkswagen subsidiary. Based in Berlin, he has a background in Cultural Anthropology and General Rhetoric, and has earned a PhD in Computer Aided Architectural Design from the ETH Zurich; he is Adjunct Professor of Design Innovation at Swinburne University of Technology in Melbourne, Australia, and teaches and coaches at the University of St.Gallen's Executive School of Management, Technology and Law (ES-HSG) in Switzerland.

For more than twenty years, Steffen has been exploring the potentials of play, games and creative technologies for ideating, learning, motivating, engaging, inspiring, providing a platform, and for communicating causes, as well as to enable self-determination. Towards these ends, he has worked with sponsors and partners such as the Björn-Steiger-Foundation, Daimler, Audi, Novartis Pharma, Bosch Rexroth, Deloitte Center for the Edge, the United Nations Population Fund, the UNESCO World Heritage protected City of Regensburg, Germany, and the City of Melbourne's CityLab.

Steffen has spoken and published widely about his interests and award-winning practice; he is co-editor of The Gameful World (The MIT Press) and had founded and directed the Games & Experimental Entertainment Laboratory (GEElab) for several years. Last but not least, he serves as the curator of bizplay, an annual Creative Play congress in Karlsruhe, Germany, now in its ninth year, as well as for the new creatables conference.

The recently founded creatables initiative unites media makers, experience designers and the Medien- und Filmgesellschaft Baden-Württemberg to boost awareness amongst, and inspire, game developers & artists, as well as other creative technologists, that creative media, technology and design outcomes can be a catalyst and a cross-innovation driver to address the United Nations' Sustainability Development Goals, see https://creatables.de. In the form of “creatables”, art and digital design have the potential to challenge the status quo, to move minds, to communicate themes and mechanics, to motivate audiences towards behavior change, and to support non-game stakeholders such as small and medium enterprises as well, the latter which are in dire need to respond to the climate, health and equality challenges we are all facing.

In this talk, I will introduce the creatables initiative, team and vision, showcase exemplary ‘creatables’, and provide an outlook of our upcoming bizplay-meets-creatables conference on 15 October 2020, and other plans beyond.